Angel Beats: Everybody Dies At The Beginning 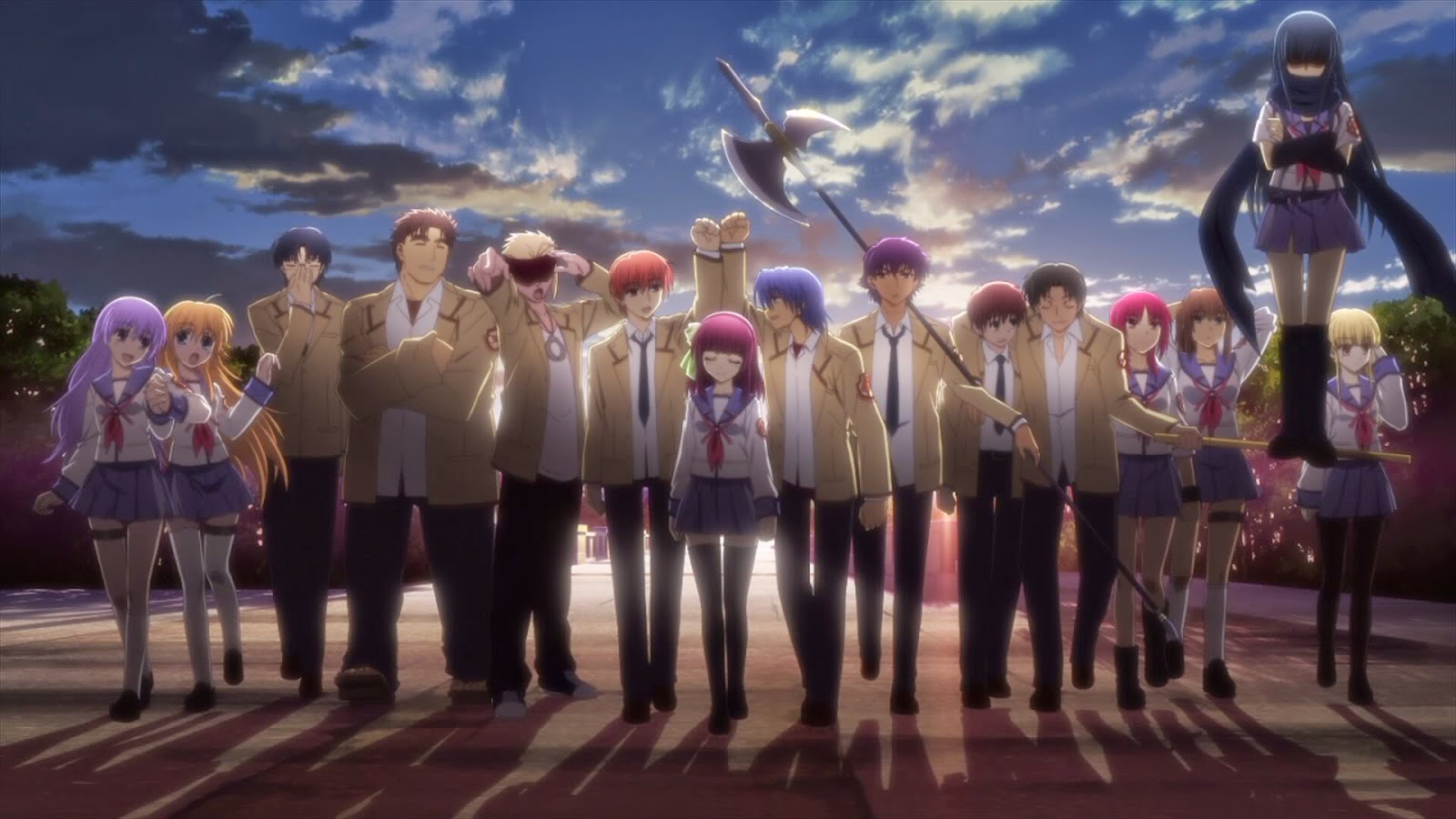 
So I've decided to stop saying that I'm writing the plot section straight from memory, since all posts will be like that, so it's a waste of time. Do expect spoilers, I didn't even try this time.

Otonashi Yuzuru arrives in a mysterious location with not a thing in his mind expect his last name. Thankfully, Nakamura Yuri (leader of the SSS, to be mentioned) is present for a brief introduction of his current situation. "Welcome to the Not-Dead-Yet Battlefront." She greets, much to Otonashi's confusion. She explains that he's in the afterlife, or something close to it, and he will be obliterated if he doesn't fight.

This afterlife, or purgatory (however you're supposed to use that in a sentence) takes the form of a high school campus, complete with: a school, teachers and students referred to as NPCs (Non Playable Characters, like the people you just interact with in video games but hold little effect to your overall goal), dorms, sports fields, and what have you. The purpose of this school is to allow the students to achieve the happiness they never got in life, and to rid themselves of any regrets they may have before moving on. Within the school, however, is a group of students who oppose this rule: the ever-name-changing SSS (Shinda Sekai Sensen; 死んだ世界戦線; Afterlife Battlefront [had to search this, sorry friends]), distinguishable by their light tan school uniforms in contrast to the regular dark blue/black uniforms of normal students. They do everything in their power to avoid the fate they call "obliteration", or moving on to whatever comes after, due to the unfair lives they once led. This includes the constant agonizing of a young girl named "Angel", the student body president who they believe to have a special connection to God.

First off, this is one of my favourite series, hands down. So as a precaution, this section might sound slightly biased, something I never really promised to refrain from but try my best to.

At first, I was sort of on the edge about starting this anime. I do not--do not--do well with shows defined as "tearjerkers", and when I heard that there would be supernatural powers and junk in it, I started to back away. Finally, after seeing that Netflix had the English dub and I no longer had an excuse not to, I decided to test it out, figuring two or three episodes was a safe place to say "I tried". Before I knew it, I had watched the entire series twice in one sitting, and the sun was rising again. I had tissues brimming the edge of my wastebasket and an empty box by my feet.

But before I get to the good stuff, I must touch about what I did not like or understand.

This might have been due to the fact that it was only 13 episodes long, at around 25 minutes per episode, but it never really dug into the backstories of a few main characters. You got to see Yuri's life, about her past and what drove her grudge against God. You got to see Otonashi's, about his sister and about his desire to become a doctor and make people happy. You even got to see Iwasawa, Hinata, Naoi, and Yui. But what about the others? They played just as big of a role as those six did, and yet the mysteries of their past lives and the regrets they bear remain unsolved. Also due to the limitations in episode length, I feel like there were times when the story became too jumpy. One second, the SSS are against new president Naoi and his way of running the school, and the next he's following them around like a dog on a leash. Similarly with Angel, and how not even 3 episodes later, the Battlefront goes from declaring her their worst enemy to helping save her life.

The end, naturally, also raised a lot of questions, one being: what happens next? While there is the possibility of Otonashi and squad reuniting in life, how is one to be so sure based off of a 6-second teaser? He could've simply been tapping her shoulder and asking her for directions to the nearest internet cafe. While I will say that there could have been a released OVA or something to confirm suspicions, but I guess that's what makes this series so good. What happens next? I don't know. The characters themselves don't even know. It really keeps you guessing and wondering, which is why I don't think Angel Beats will be an easily-forgotten series.

Now onto the good stuff, and boy, is there lots.

I'm a wimp. Show me something sad, something that might've only put a frown on someone else's face, and I'd probably dry-drown myself. I knew from the start, as mentioned above, that this was going to be no different. If I could use one, simple word to describe this anime as a whole, it would be: beautiful. The animation, the story, the tone, the characters, the music, both theme and insert, were all beautiful. I don't think I've ever seen anything that's made me care more about a group of fictional characters before Angel Beats. Of course the music was going to kick ass, I mean, most of the songs were composed by JUN MAEDA, but you know. The concept itself was fairly original, and I love how they made something that could've been straight tragedy heartwarming and comedic at the same time. There was no time to weep over death, since they were already dead, but even knowing the inevitable didn't take away from just how depressing the last few episodes were.

There were two things that stood out to me most: One, the characters. They were already developed well before the beginning. Most lived lives in which they were helpless to their fates and their suffering brought on by those close to them, their regrets ranging, but all coming back to not living to please themselves and others. It's never confirmed whether Yuri died during the burglary or not, but she did regret not being a better older sister and protecting her siblings properly. Naoi's twin brother died while they were both young and he was pulled from his comfortable lifestyle in the shadows, forced to take the place of his brother, who was a skilled pottery maker (there's a term for this, though...I don't remember it) before his death. Naoi's regret may have been never truly pleasing his father and earning his approval before he fell ill, even though there were times when he did come close. Yui became paralyzed after a car accident when she was very young, and she couldn't do much of the things she wanted to do, the things she saw on television. I guess her regret in life was being a burden on her mother, who became her fulltime caregiver, and not enjoying her life because of her handicap. These are only a few of the stories, but you do see where I'm going with this, correct?


Two, the music. As I state above, if it's Jun Maeda, you bet I'm bumping it. The background music, while going unnoticed for some, heavily set the mood in placed scenes, most notably Memory (used in Otonashi's backstory, I think) and Unjust Life (used when Otonashi confronted Naoi on the grass field, again, I think). Though they were used almost once an episode, those are the times where I can...probably...remember hearing it. Not to forget the more upbeat ones, such as Girl's Hop and Noda's theme Worthy Rival. The opening theme and ending themes, while contrasting greatly amongst themselves, complimented the anime perfectly, in my most honest opinion. The special ending themes, 一番の宝物 (Yui ver, used in the episode centering her, and Karuta ver, used in the last episode), were gorgeous music-wise, the lyrics smoothly capturing the deep emotions of moving on, in this case, to another life. (For a full playlist of the songs, click here. I may work on a zip download later.)

Another thing, on a smaller scale, it was so good that I actually watched both the original Japanese and English dubs, which is something I tried hard to avoid, and I liked the English dub better! Now, I do attempt watching more dubbed anime, and I use that word loosely.

[Note: So I recently found out that there's a prequel manga? Only Hinata is the main character. I should check this out.]
Posted by 유이 at 9:53 AM