Flowers Of Evil: I'm a Pervert and I'm Proud of It 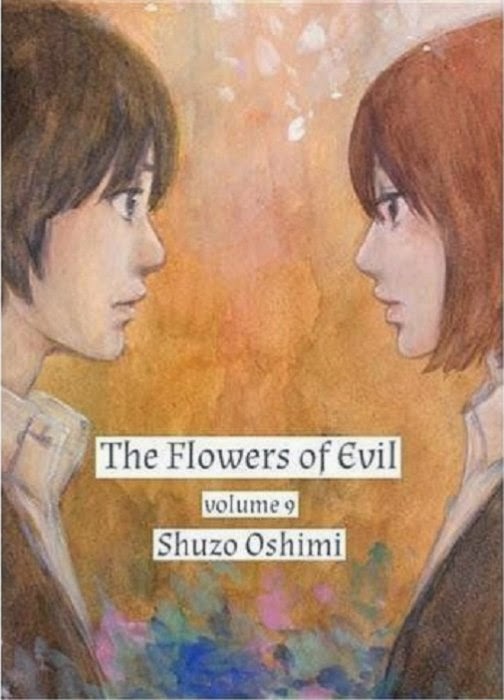 You know, this could have easily been solved had he just not done the thing.

(I'm going to try and write this without referring back to the Wikipedia page or re-reading the first few chapters.)


Kasuga Takao is a normal, hormonal male in middle school (high school? This is stressful). He doesn't really have any talents that makes him stand out, he just happens to adore literature, a trait thought to have come from his father, and what he believes to set him apart from the rest of his small, mountain-centered town. He practically worships a girl in his class, Saeki Nanako, thinking of her as something of a deity than a regular human being. His muse. His femme fatale. Kid's obsessed. One day, while returning to the school to retrieve his latest read--Les Fleurs Du Mal by Charles Baudelaire--he sets sight upon Saeki's gym bag, which has just fallen to the ground. Instead of placing them in their locker, he decides to remove the clothes out of the bag. While holding them, he hears noises outside the classroom door and panics, quickly stuffing the gym clothes under his shirt and running away. It is then revealed that Nakamura Sawa, another girl in his class who sits behind him and is generally seen as "strange", witnessed Kasuga stealing the clothes. She then tells Kasuga that, in exchange for forgiveness, he shall be included in a contract with her.

From then, Nakamura puts Kasuga through a variety of degrading and humiliating acts, including pushing him into Saeki's breasts and forcing him to wear her gym clothes while on a date, in order to find out Kasuga's "true character". Kasuga, at first confused at Nakamura's seemingly impulsive actions and lack of empathy, starts to view her as a friend, someone who shares the similar desire to escape their average lives to beyond the mountains, instead of a sadistic jerk.


This manga is broken into two parts, the first taking place before the summer festival, and the second taking place about 3 or 4 years after. The anime only covers the first (excluding the summer festival), but the last episode heavily hints at a season 2(maybe) about the second. Of course, I don't see this in the near future, considering the manga only ended earlier last year, but I still have high, high hopes.

I was originally going to make this about the anime, but because the manga covered a lot more, thus giving me more to talk about, this will mostly be about the manga. Unlike the other series I've read in the past, I didn't search around much about this manga before starting it. All I had known was what I'd read in online comments: It was dark, twisted, and a must-read. While I will say this manga was indeed "dark and twisted"--an essential in the psychological thriller genre in which it is categorized--I will not say that it's a must-read, or at least something to jump and buy. The story-line along with the dialogue points and undertones were fantastic, accurately conveying the mind of a young boy helplessly controlled by the actions of himself and others (namely Nakamura).

But...that was pretty much it.

The conflict was, ultimately, lost on me. It seemed like just the story of a boy growing up, sick of his town, sick of blending in, his only escape being books and the (toxic) love of his life. Only, along with the usual in a teens life--school, friends, family--he's dealing with an equal desire-driven, eccentric girl who at first comes off as batshit crazy and licentious. Just growing up in a different way. The only thing that truly stuck with me was the way Nakamura, and later Kasuga, viewed their life: in some kind of ironic, poetic way. On the surface, you'd think they, well, completely hated it. But deeper down, they didn't. The only problems they had with their lives were the contents within and they way they played in.

Another thing was the flowers. I'm assuming Kasuga also used the metaphor of the flowers in a similar way: the seeds of the flowers, are the wrongs one make (in this case, stealing Saeki's clothes). Once planted, they continue to grow, both in the ground and in the mind. Feeding off carbon dioxide, the person's sanity. Releasing oxygen, madness. Eventually, the flowers grow to block out the sunlight and you're left in the darkness that you created. Or something like that?

Anyway, bad points aside, I want to talk about what I did like. Starting with the anime. I loved the animation style, everything about it. If anything was keeping me into the series, it was the animation. Flowers Of Evil was done using an animation technique called Rotoscoping, which means that the artist used live footage of the scenes, drawing over them to create the finished product: an anime with a life-like feel. Apparently, this created a lot of ruckus amongst the manga fans, feeling the style removed from the original feel of the work. I will admit, it took a while to get used to. It was literally unlike anything I'd ever seen before. However, looking back, I'm glad it wasn't done using traditional styling. I can't even imagine how it'd look, anymore. It was something new, something refreshing. It was iconic, and I loved it.

The opening themes changed every few episodes, the first being sung by "Kasuga", the second "Nakamura", the third "Saeki". You can tell based off of the lyrics, honestly. I'm still not sure about the third one, and I've seen online that some people think it to be Tokiwa Aya, though she doesn't appear until the second half of the manga, so I really don't see it. (Unless this was one of the many hints to a season 2, then maybe.)

The ending theme was...how do I begin to describe it? Eerie. Abnormal. Downright disturbing. Especially when it starts before the credits, when you least expect it. At the end of every episode, there is a scene where flowers appear along with audio clips of the next episode, and there are around 13 total. There are also awesome little author notes at the end. I didn't exactly know what to make of these, but they were still different and cool.

Now, the manga, which I liked a lot better. Though I am sort of upset about the time skip between the summer festival and the second part, and then to Tokiwa and Kasuga getting married(??) and the lives of the main girls being resolved just like that. I still want to know what changed Nakamura? There had to have been some pretty extreme reason for her to suddenly abandon her outlandish behavior. I don't think this was ever dwelt upon, or maybe I wasn't paying attention. What about Saeki? Had she ever truly gotten over Kasuga? Just small questions, but I feel like those lines were cut before they even had a chance to knot. Yes, this manga did drag at some parts and I was glad when I finally finished it (only to have it update 2 times during break), I feel like this was because they dug deeper into all the wrong parts. There may still be a chance to catch on this in season 2 of the anime. There has to be a season 2.

And on a smaller note, did anybody notice the progression in drawings from start to finish? 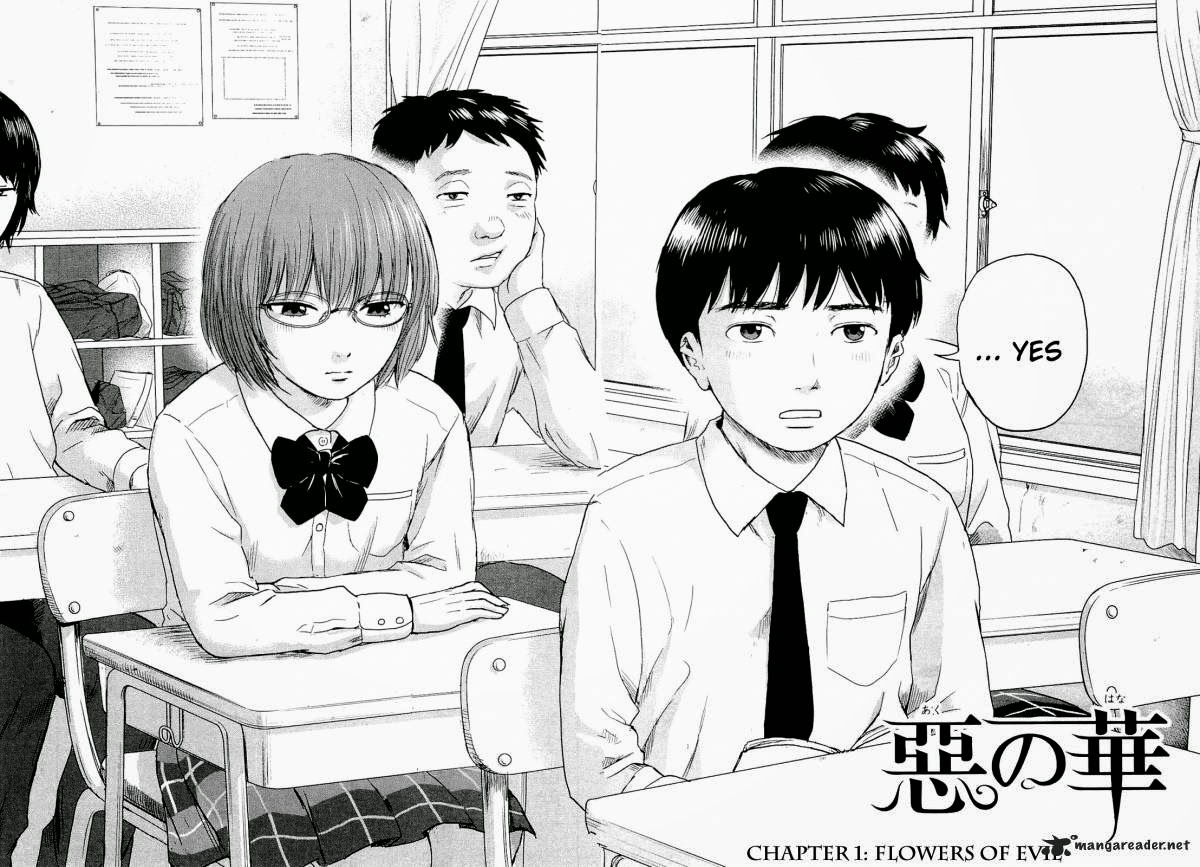 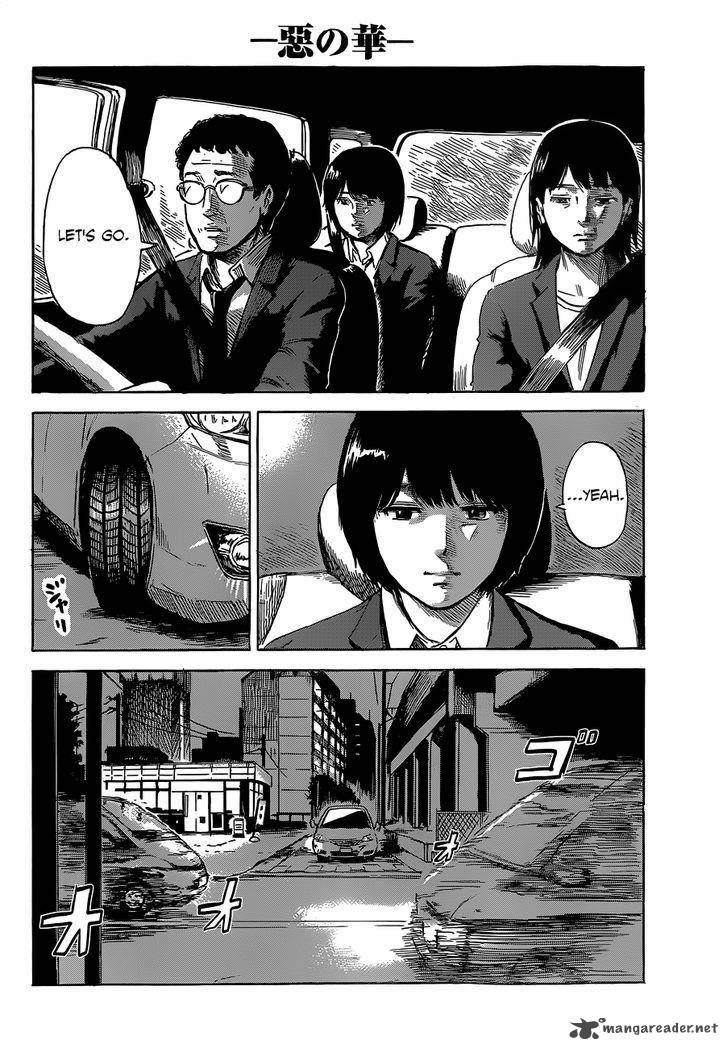 It's interesting. In the beginning, the characters looked like bobble-heads with clunky arms and boxy figures, sort of disproportionate. By the end, however, the lines had softened out and the heads had deflated. It looked a lot nicer, in my opinion. Just something I wanted to point out.

All in all, I think it was an ok watch and a pretty great read, and I might re-watch/read when I have the chance, though it doesn't hold too high in priority.